How is chemistry adapting to the future? The impact of the economy and new technology on chemical research will be discussed, as well as emerging trends and concerns in publishing, funding, and ethics. 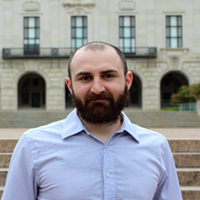 Shawn Blumberg was born in Santa Monica, California and raised in Portland, Oregon. He began his studies at the University of Oregon in 2003 as a Business major but quickly discovered his interest in biology and organic chemistry. Under the supervision of Dr. Darren Johnson, he synthesized ligands in an effort to bind toxic metals and remove them from contaminated water. While much of his undergraduate studies focused on biochemistry, Shawn maintained an interest in organic chemistry. When he received his B.S. in Biochemistry in 2007, he immediately entered the Chemistry masters program at the University of Oregon. Through his enrollment in the university’s masters internship program, he participated in an industrial internship at Synthetech (now part of Grace) in Albany, Oregon for two years while earning his degree. At Synthetech, his work on large-scale synthesis of amino acid derivatives and API intermediates helped him realize his passion for organic synthesis, and he decided to pursue a PhD in organic synthesis. Shawn’s mentor at Synthetech, a University of Texas at Austin alum, encouraged him to consider his former program, and after visiting the university, Shawn was quickly sold on the synthetic groups that would be available to him.

Currently, Shawn is working under Dr. Stephen F. Martin where he works on novel synthetic methodologies and total synthesis. Since joining the group, he has worked toward organocatalytic asymmetric halocyclization and has made significant progress toward the total synthesis of Cortistatin A. After Shawn earns his PhD, he plans on working in a synthetic research lab that focuses on custom synthesis of API’s, specifically anti-cancer molecules. 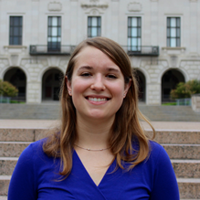 Katharine Diehl was born and raised in Augusta, GA. She studied chemistry at the University of North Carolina at Chapel Hill as a Johnston Scholar. While at UNC, Katharine worked in Marcey Waters’s lab on a project to develop receptors for methylated arginine and lysine using dynamic combinatorial chemistry. Her interest in teaching led her to work as a TA for a freshman general chemistry lab during her senior year. Besides chemistry, Katharine also studied German at UNC and traveled to Berlin for a study abroad program in 2009. She graduated from UNC in 2010 with a Bachelor of Science in Chemistry and a minor in German.

Katharine is currently a fourth-year graduate student in the Anslyn group at the University of Texas at Austin. Her research projects involve developing differential sensing methods that target various biologically-relevant analytes by exploiting the binding properties of serum albumin. While at UT, she has received a Henze Teaching Excellence Award from the chemistry department for her work as a TA. After graduate school, Katharine plans to pursue a career in academia. 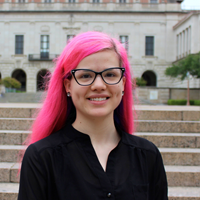 Alex Gade is a 5th year graduate student in the Anslyn group at UT Austin. Although her background and training from her undergraduate education at the College of William and Mary is in synthetic organic chemistry, her graduate work has been focused on the development of DNA-based biosensors for the detection and differentiation of human cancer cell lines of various tissue origins. As a result of the biological nature of her project, Alex has gained unexpected skills in molecular biology techniques during her graduate career, while still pursuing traditional organic chemistry in the synthesis and purification of the designed DNA-scaffolded sensors. With an anticipated graduation in Spring 2014, Alex is particularly concerned with future career prospects for newly minted Chemistry PhD’s. 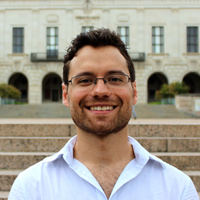 Netzahualcóyotl Arroyo Currás (Netz Arroyo, born March 8th, 1986) is a Mexican scientist currently pursuing a Ph.D. in Analytical Chemistry at the University of Texas at Austin, working under the supervision of Dr. Allen J. Bard. He was born in the city of Puebla, Mexico where he completed his compulsory education in 2004. He then moved to Monterrey, Mexico to attend college at Tec de Monterrey from which he obtained his B.S. in Chemistry in 2009. He has been active in research since 2004, working in the fields of molecular biology, cell therapy, analytical chemistry, organic synthesis and electrochemistry. After Netz is done with his Ph.D. at UT-Austin, he plans to continue his academic career at a place where family, hobbies and passion can be put together.

Origin of his name: The name Netzahualcóyotl comes from Náhuatl and means "coyote who fasts." It is the name of one of the most iconic characters of pre-Columbian Mexican history: ruler (tlatoani) of the city-state of Texcoco, philosopher, warrior, architect and poet. The name was given to Netz right at the moment of his birth, mainly promoted by his father (who was Mexican), yet, immediately adopted by his mother too (who was Spanish). Netz believes that his name has played a fundamental role in shaping his personality and is proud of its historical roots. An anecdote he often tells about his early life recalls the time when he was in kindergarten and had to learn how to write his own name. While all the other kids with simple names were able to do it rather quickly, it took little Netz a greater effort to accomplish this task, since he had all the difficult letters from the alphabet in his name (without even considering the count!). 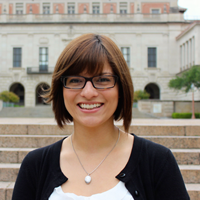 Victoria Cotham grew up in southern California but decided to travel eastward in pursuit of higher education. She received her B.S. from the Pennsylvania State University in 2010. While attending her undergraduate institution, she participated in four years of research in the analytical chemistry lab of Dr. Dan Sykes. Her research included collaborative work with Supelco, a subsidiary to Sigma Aldrich, to develop a systematic approach to isolate the variables that effect HPLC column efficiency and stability. Other work included the construction and optimization of small-scale instrumentation that could be incorporated into undergraduate analytical chemistry laboratory curriculum for enhanced learning of chemical techniques. In 2008 she completed a NSF REU at the University of California, Irvine, where she worked under the guidance of Dr. Reginald Penner to assist in the development of phage-based biosensors.

Currently, Victoria is a NSF Graduate Research Fellow and member of Jennifer Brodbelt’s research group at the University of Texas at Austin. Her work focuses on the development of novel mass spectrometry-based photodissociation methods for incorporating greater selectivity into proteomic and immunogenic workflows. After completing her doctoral work, she plans to pursue a career that utilizes her skill sets in mass spectrometry and proteomic analysis; preferably in the area of cancer research. 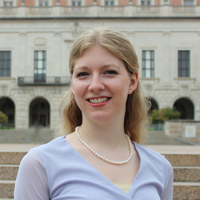 Rebecca Anderson grew up in Vestavia Hills, AL and received her B.S. in chemistry from the University of Alabama in 2010. As a member of the Computer-Based Honors Program, she worked in the computational chemistry group of Dr. David Dixon focusing on DFT benchmarking of second and third row metallic hydrides and fluorides. She also completed a summer internship in atmospheric science as a Hollings Scholar at the National Oceanic and Atmospheric Administration’s Earth System Research Laboratory in Boulder, CO. While at the university, she was also named a Goldwater Scholar and a member of USA Today’s All-USA College Academic Team. Upon graduation, she was awarded the Dean’s Award of Merit, given to the top ten graduating seniors in the College of Arts and Sciences.

Currently, she is pursuing her Ph.D in Physical Chemistry at the University of Texas at Austin as a member of Dr. Peter Rossky’s theoretical chemistry group. Her research centers on the development of a new model to describe the dynamics of hydrated electron clusters. Her career goals are to remain in academia and become a professor. 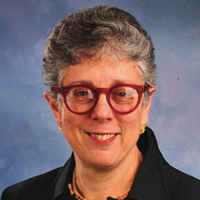 Dr. Paula Stephan received her B.A. in Economics from Grinnell College and her M.A. and Ph.D. in Economics both from the University of Michigan. She is currently a Professor of Economics and Senior Associate at Georgia State University’s Andrew Young School of Policy Studies. Dr. Stephan’s research interests include the economics of science as well as scientific careers. She is also a research associate for the National Bureau of Economic Research. She was elected a fellow of the American Association for the Advancement of Science in 2011 and has served on many committees and panels including the Advisory Committee of the Social, Behavioral, and Economics Program, National Science Foundation, (2001-2008), the National Advisory General Medical Sciences Council, National Institutes of Health (2005-2009), and the Committee to Review the State of the Postdoctoral Experience in Scientists and Engineers, National Academics (2011-2012). She is currently on the board of reviewing editors for Science and also is a member of the National Research Council Board on Higher Education and Workforce. Her book How Economics Shapes Science was published in January 2012 by Harvard University Press. 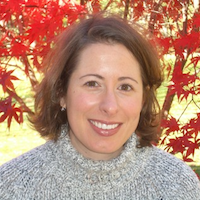 Sonja Krane received her PhD in chemistry from Columbia University under the supervision of Dr. Koji Nakanishi. She then moved on to the University of Pennsylvania as a Susan G. Komen Foundation Postdoctoral Fellow to continue her graduate research interest in biologically-active natural products. For the past eight years, Sonja has served as the Managing Editor of the Journal of the American Chemical Society. In this position, she has worked to improve the efficiency if the editorial office by implementing an electronic workflow to streamline manuscript handling. Furthermore, she has led the introduction of journal features like Perspective research articles and research Spotlights in JACS. Overall, Sonja has been instrumental in the adaption of JACS to the digital age. 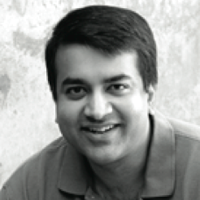 Gautam Bhattacharyya received his B.S. in chemistry in 1992 from Brown University, his A.M. under E. J. Corey at Harvard University in 1994 and his Ph.D. under G. M. Bodner at Purdue University in 2004. He then taught organic chemistry at University of Oregon from 2004 to 2006, and then moved to Clemson in 2006. His current research interests include how graduate students develop professional identity, how ethics in chemistry are taught, and how graduate students learn “the rules”. He studies the decision-making processes regarding routine lab activities and data validation, and how representational systems such as reaction mechanisms are learned and taught in chemistry.

Dr. Bruce C. Gibb is a professor of organic chemistry at Tulane University in New Orleans, LA. He received his Ph.D. in 1992 from Robert Gordon’s University and went on to post-doc with Prof. John Sherman and later Prof. James Canary. Research in the Gibb lab focuses on the development and study of new and interesting supramolecular systems in aqueous solution. Dr. Gibb has been a regular contributor to Nature Chemistry since its inception in 2009 and has published many theses in the journal covering a wide variety of topics – from turning cooking curry into a science experiment to the effects of hunger on our perception of scientific data – his ideas are accessible to chemists of all disciplines. Some of the perspectives Dr. Gibb has published concern current issues in academia, such as the importance (or lack thereof ) of h-indices, the future structure of chemistry departments, and solutions to problems in funding basic scientific research. 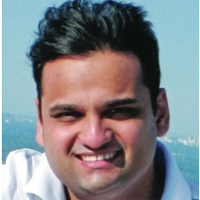 Ashutosh “Ash” Jogalekar received his PhD in chemistry from Emory University where he studied the conformations of flexible biomolecules. After completing post-doctoral work at UNC- Chapel Hill and Sanofi-Aventis, he moved to Ensemble Therapeutics where he currently works on structure-based drug design and conformational analysis of macrocycles. Dr. Jogalekar is perhaps most widely known for his blog “The Curious Wavefunction,” which covers issues related to chemistry as well as the history and philosophy of science in general. Over the past eight years, his writings have appeared in a variety of prestigious publications including Chemical and Engineering News, Nature Chemistry, and Scientific American where his blog is currently hosted.